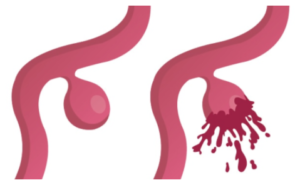 Leona Lewis’s, “Bleeding Love”, was released in 2007 and was nominated for Record of the Year and Best Female Pop Vocal Performance at the Grammy’s. However the British pop song may creatively illustrate some points from a recent article in, Operative Neurosurgery, regarding misconceptions of cerebral aneurysm treatment.

A brain aneurysm is an outpouching of a blood vessel’s wall, which can rupture and cause a brain hemorrhage. In the setting of aneurysm rupture, it is important to fix the aneurysm so it does not bleed again. 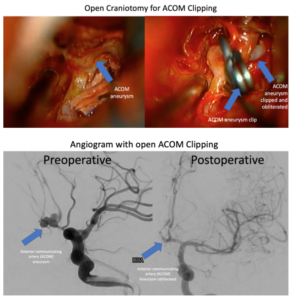 The traditional treatment for aneurysms is opening the skull (craniotomy) and placing a metal clip across the aneurysm, which is a fairly invasive procedure with risk. Clipping has a high rate of success in permanently fixing the aneurysm. A potentially less invasive alternative is endovascular coiling, in which metal coils are placed from inside the blood vessel to achieve a similar result. Coiling has become more popular since the 1990s. Because endovascular treatment only requires a needle puncture compared to a larger skin incision on the head, many have argued to favor endovascular coiling. However coiling has a lower rate of complete aneurysm occlusion.

The International Subarachnoid Aneurysm Trial (ISAT) was a pivotal 2002 study in Lancet comparing the two treatment options for ruptured intracranial aneurysms. The study indicated that for a particular subset of aneurysm patients, endovascularly coiled patients may fare better at one year than clipped patients. This has led many to think that endovascular coiling is the better treatment option in all circumstances. However these results may have been 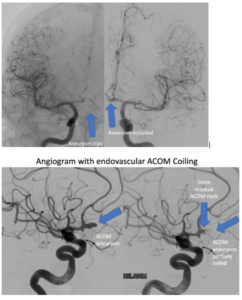 incorrectly generalized. It is essential to realize that the ISAT trial did not really assess “all-comers”. If a patient had an aneurysm which the neurosurgeon thought should be clipped, the patient was clipped and not enrolled in the study. Similarly, if the patient was predicted to do best with coiling, they were coiled. 76% of patients eligible for the trial were excluded because the treating providers treated in the fashion they thought was best. That left only 24% of the eligible patients to be randomized to either clipping or coiling, so the results of this study may not apply to all patients today. Additionally, certain aneurysm locations were under-represented in the study, including middle cerebral artery aneurysms. A more accurate impression of the ISAT may be, “In patients suitable for either clipping or coiling at centers involved in the ISAT, coiling yielded a better functional outcome at one year for some aneurysm types”. Of course, longer follow-up of the ISAT patients demonstrate that the differences in outcome vanished over the years.

Because coiling involves placing the pieces of metal from inside the aneurysm outpouching, the base (or neck) of the aneurysm may be left untreated to avoid coil migration back into the main blood vessel. If any part of the coil occupies the main artery, a stroke could occur. As the coils are packed in the dome of the aneurysm, at the most common rupture site, proponents of coiling indicate “dome protection” is good enough. 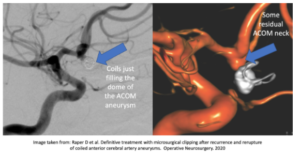 Coils in the dome of the aneurysm may be a “band-aid” for the time being, but may not fix the entire problem. The risk of immediate re-rupture is low, and additional procedures can be performed later with stents or other devices to fully occlude the aneurysm (repeat procedures are required about 19-27% of the time). However while waiting for those future procedures, re-bleeding can occur in coiled patients. This could be shocking for some, because they already were “cut on” once, but still could bleed again?

In the ISAT patients, rebleeding following coiling occurred about 2% of the time in the first year. In long-term follow-up, rebleeding was statistically more common in them. Re-rupture of anterior communicating artery (ACOM) aneurysms seems to be more common than other aneurysm locations. 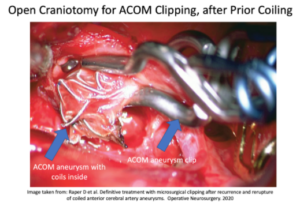 Retreatment of previously coiled aneurysms can involve placing more coils, or performing a craniotomy with clipping. Re-coiling may be more likely to result in incomplete re-treatment. Clipping may offer a greater chance at permanent occlusion. The risk of permanent neurologic injury of surgical clipping a failed coil is about 5%. Clipping a previously coiled aneurysm can be very challenging. Therefore, arguments can be made to more strongly consider clipping ACOM aneurysms from the start, if complete occlusion cannot be achieved with coiling.

There may be no good reason to… “keep, keep bleeding”, Leona.