On November 19, 2021, the current health summary of President Biden was released by Dr. Kevin O’Connor, DO, the physician of the President. Of note, the current White House physician (who is not the Surgeon General) was Dr. Biden’s personal physician prior to taking office. It is very unusual for the President’s previous PCP to follow him to office, since the pay is poor, the job is usually boring, and it would otherwise cause them to abandon their normal medical practice. In the case of Dr. O’Connor, he was already retired (also abnormal), so these considerations may have been less relevant for him.

One of the most pressing issues addressed in the Memorandum was Biden’s gait: 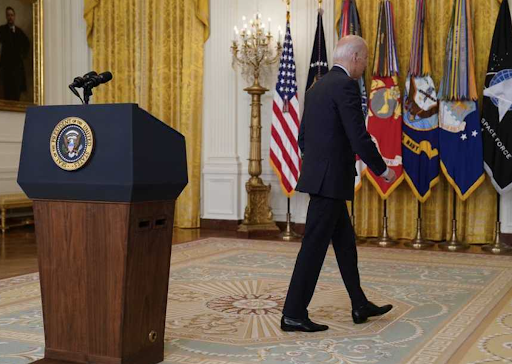 A person’s “gait” refers to how they walk. Gait disturbance refers to any deviation from normal. Two common reasons for a gait problem is either a “functional” or “organic” disorder. Functional gait disorders do not have a structural problem, and occur about 40% of the time. Diagnosing a functional gait disorder is challenging since they are not always psychogenic (but sometimes are) and can be similar to other prominent neurologic causes. They may overlap with organic etiologies, especially in older persons. Organic gait problems usually arise from a problem somewhere in the nervous system, whether brain, spine or peripheral nerve, or muscular system.

Age factors into gait problems. Among adults older than 80 (Biden is 79), 60-80% have gait problems. This is problematic since it contributes to reduced mobility, increased fall risk, diminished quality of life and serious injuries including major fractures and head injury.

Dr. O’Connor concluded that President Biden’s gait was likely due to “mild peripheral neuropathy” in both feet. Biden was not found to have diabetes, vitamin deficiency, or alcoholism, although the cause of peripheral neuropathy is often unidentified. Of note, Biden reportedly has moderate-to-severe spine arthritis, but this “did not result in nerve root compression significant enough that they would warrant any specific treatment.” Just as with much of society, lumbar arthritis is prevalent but does not always explain symptoms. However, the report of the spine imaging has not been provided. The documented neurologic exam was simply, “strength and reflexes are all normal and symmetrical… mildly decreased heat/cold sensation in both feet”.

“A trial of custom orthotics will be initiated to optimize foot biomechanics”.

Seems simple enough… Yet is this the correct diagnosis?

Biden’s gait is narrow-based with straight leg movements and locked knees. Step distance is short. He does not overly elevate his legs off the ground. His arm swing is minimal to absent. He leans forward. He does not appear overly steady. It would appear that our President has an “organic” gait problem.

Much of neurologic diagnosis of gait is “sign-based”. Different aspects of gait may suggest various neurologic or muscle impetuses.

Ataxic gait
Cerebellar ataxia and central sensory ataxia (back part of spinal cord) both can cause a wide-based and wobbly gait, thought to arise from the body’s inability to know where it is in time/ space. This is called a proprioceptive deficit. If proprioception is impaired with the eyes closed (no visual input) then part of the spinal cord, called the dorsal columns, may be the problem. Nowadays, this can occur with vitamin deficiencies like B12 or vascular malformations. However if it is impaired even with the eyes open, then this may be a cerebellar problem. Leg movements and step length are irregular and variable, and dysfunction is worse on turning and during complex gait tests (tandem gait). Gait initiation is usually normal.

Biden’s vitamin levels are reportedly normal and he says he’s a teetotaler. He clinically doesn’t seem to have an “ataxic gait”, either in the brain or spinal cord.

Parkinsonian gait
Parkinson’s disease is characterized by resting tremor, slow movement, rigidity and postural instability. The symptoms usually affect one side of the body and then spread to the other. With disease progression, a rigid akinetic gait develops, including slow gait with short step length and a narrow base with stooped posture. Arm swing is reduced, and in more advanced stages the arms are held against the body and slightly bent at the elbows. The feet barely elevate off the ground, called a shuffling gait. When walking faster, persons increase the amount of short steps instead of taking longer steps. Standing from sitting position is difficult and persons tend to lean forward. These patients tend to fall forward.

While gait symptoms can be the predominate/only symptom of Parkinson’s (and other versions of Parkinson’s exist… so called “Parkinson’s plus” disorders), Biden does not seem to have other cardinal features. It would surely be a massive scandal if Biden had PD and the public was unaware. This is unlikely.

Frontal gait
Frontal lobe gait disorders are common in older age, and may be misdiagnosed as Parkinson’s disease. However other symptoms in addition to walking problems helps differentiate the etiology. Persons with frontal gait disorders frequently appear to have forgotten how to perform the act of walking. They have difficulties standing up, inadequately adapt to the posture of standing up (they may extend rather than bend the truck and legs with attempts to stand) and have difficulties achieving a stable position. As with “ataxic gait”, it may be broad based, with shortened steps. Some persons can appear anxious. Arm swing may be reduced. Trunk posture may be forward. In some cases, shuffling occurs and the feet may appear glued to the ground (“magnetic feet”). After walking a few feet, the gait improves. Freezing episodes may occur. Balance and postural stability are impaired. Mild rigidity may be found, predominately in the legs, and this is termed “lower body Parkinsonism”. Cognitive changes, such as dementia can occur, secondary to the brain dysfunction. And due to predominately “association” or “processing” areas of motor control being affected, patients may not have weakness, sensory loss or reflex changes.

President Biden is known to have suffered aneurysm rupture and therefore could have some frontal-temporal lobe damage. Even just considering his age, he could simply have normal pressure hydrocephalus. His clinical profile, on the surface, seems to match.

Antalgic gait
These patients have pain in their leg, and usually this type of gait only affects one extremity. Knee arthritis, ankle sprains, or even “sciatica” can cause an antalgic gait. Persons appear to be walking as if there was a thorn in their foot. This is not how Biden ambulates.

Steppage gait
This occurs from a weak foot (dorsiflexion weakness). The person must lift one leg higher than usual during the swing phase so they don’t trip on their toes. They are unable to stand or walk on their heels because the foot is weak and they can’t point the toes to the sky. Biden does not show signs of unilateral dorsiflexion weakness.

Myelopathic gait
Narrowing of the cervical spinal canal can compress the spinal cord. The gait is stiff and weakness of the legs may be present. Sensory dysfunction may impair the body from sensing balance. The gait is commonly more wide-based, which is unlike Biden. It typically also causes arm symptoms, with hand dexterity difficulty. These persons have trouble writing, opening jars, or buttoning shirts. The tend to have hyperactive reflexes (although this can be masked by peripheral neuropathy), and Biden has normal reflexes. Joe doesn’t look myelopathic.

Lumbar stenosis
Due to compression of the nerves in the low back, there is pain with walking and even weakness and/or numbness. Persons walk flexed forward to make more room for the nerves in the spine. There is an inhibited, slow, short-stepped gait. There may be numbness in the feet, causing persons to step flat and hard since they cannot feel the ground on the bottom of their feet. This is similar to how Biden appears, with the exception that our President does not seem to be in any pain. He could be very stoic, however the lack or pain and disclosure of non-compressive imaging may suggest lumbar stenosis is not the predominate cause. Even though his speeches are short-ish, he would have a heck of a time standing at a podium for long.

Peripheral sensory ataxia
This is the diagnosis the public has been given by Dr. O’Connor.

After the sensory nerves leave the spinal cord, they may malfunction. Many older persons suffer “neuropathy” with some numbness, tingling or burning pain in the feet. Typically the symptoms involve the entire foot, called a “stocking” distribution, as if the area covered by a stocking/ sock is affected. Due to the numbness and loss of proprioception, the gait is wide-based and the step length is shortened. Persons use visual control to compensate for the loss of feel and they may look down. However the feet often are lifted high and the gait may have a stomping quality because the person is trying to find ways to feel the ground with the foot. Biden does not elevate his legs or have a wide-base. Loss of sensation in the feet would not cause limited arm movements or rigid legs.

While the medical records of our current President are fairly sealed, it is obvious a gait abnormality is present and it’s likely “organic”. He probably has peripheral neuropathy, just as many older individuals, but his overall gait does not seem to match this common diagnosis. A “frontal gait” disorder may be more likely. Luckily if Biden has a frontal disorder, it may be static from prior aneurysm rupture/ surgery. Brain imaging may be informative. Various other etiologies exist, including strokes or normal pressure hydrocephalus. Of course tumors or progressive degenerative conditions like Alzheimer’s or frontotemporal lobe dementia would be progressive and much more concerning.

For now, we’ll simply have to wait and see. Regardless, with a bit of information, gait analysis can be a perplexing yet interesting game to play while people-watching at restaurants or airports… I guess in a nerdy neurological fashion…